Apples appear in many religious traditions, often as a mystical or forbidden fruit.

In Greek mythology, the Greek hero Heracles, as a part of his Twelve Labours, was required to travel to the Garden of the Hesperides and pick the golden apples off the Tree of Life growing at its center. 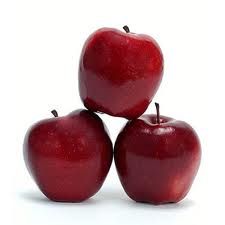 Trojan War and the Apple

The Greek goddess of discord, Eris, became disgruntled after she was excluded from the wedding of Peleus and Thetis. In retaliation, she tossed a golden apple inscribed Καλλίστη (Kalliste, sometimes transliterated Kallisti, ‘For the most beautiful one’), into the wedding party.

Three goddesses claimed the apple: Hera, Athena, and Aphrodite. Paris of Troy was appointed to select the recipient. After being bribed by both Hera and Athena, Aphrodite tempted him with the most beautiful woman in the world, Helen of Sparta. He awarded the apple to Aphrodite, thus indirectly causing the Trojan War.

The apple was thus considered, in ancient Greece, to be sacred to Aphrodite, and to throw an apple at someone was to symbolically declare one’s love; and similarly, to catch it was to symbolically show one’s acceptance of that love. An epigram claiming authorship by Plato states:

I throw the apple at you, and if you are willing to love me, take it and share your girlhood with me; but if your thoughts are what I pray they are not, even then take it, and consider how short-lived is beauty.

Atalanta and the Apple

Atalanta, also of Greek mythology, raced all her suitors in an attempt to avoid marriage. She outran all but Hippomenes (also known as Melanion, a name possibly derived from melon the Greek word for both “apple” and fruit in general), who defeated her by cunning, not speed. Hippomenes knew that he could not win in a fair race, so he used three golden apples (gifts of Aphrodite, the goddess of love) to distract Atalanta. It took all three apples and all of his speed, but Hippomenes was finally successful, winning the race and Atalanta’s hand.

In Norse mythology, the goddess Iðunn is portrayed in the Prose Edda (written in the 13th century by Snorri Sturluson) as providing apples to the gods that give them eternal youthfulness.  Buckets of apples were found in the Oseberg ship burial site in Norway, and that fruit and nuts (Iðunn having been described as being transformed into a nut in Skáldskaparmál) have been found in the early graves of the Germanic peoples in England.

The forbidden fruit in the Garden of Eden

Though the forbidden fruit of Eden in the Book of Genesis is not identified, popular Christian tradition has held that it was an apple that Eve coaxed Adam to share with her. The origin of the popular identification with a fruit unknown in the Middle East in biblical times is found in confusion between the Latin words mālum (an apple) and mălum (an evil), each of which is normally written malum.The tree of the forbidden fruit is called “the tree of the knowledge of good and evil” in Genesis 2:17, and the Latin for “good and evil” is bonum et malum.

Apples are cleaners. Among some of the reported actions are benefits for those exposed to radiation. It has been reported that apples are beneficial in binding radioactive residues and helping to excrete them from the body.

Apples can also help remove toxic metals like lead from the body.

Maybe one of the most important cleaning actions provided by apples has to do with cholesterol. The pectin, as well as other constituents, play a role in reducing the bad cholesterol in the body. This is good news for blood vessels and the heart. Because apple is also a hemetic, it can build the blood as well as cleanse it.

It is one of the most widely cultivated tree fruits, and the most widely known of the many members of genus Malus that are used by humans. Apples grow on small, deciduous trees. The tree originated in Central Asia, where its wild ancestor, Malus sieversii, is still found today.

Apples have been grown for thousands of years in Asia and Europe, and were brought to North America by European colonists. Apples have been present in the mythology and religions of many cultures, including Norse, Greek and Christian traditions. In 2010, the fruit’s genome was decoded, leading to new understandings of disease control and selective breeding in apple production.

There are more than 7,500 known cultivars of apples.

About 69 million tonnes of apples were grown worldwide in 2010, and China produced almost half of this total. The United States is the second-leading producer, with more than 6% of world production. Turkey is third, followed by Italy, India and Poland.

The apple tree was perhaps the earliest tree to be cultivated, and its fruits have been improved through selection over thousands of years.

Alexander the Great is credited with finding dwarfed apples in Kazakhstan in Asia in 328 BCE;  those he brought back to Macedonia might have been the progenitors of dwarfing root stocks.

Winter apples, picked in late autumn and stored just above freezing, have been an important food in Asia and Europe for millennia

In the wild, apples grow readily from seeds. However, like most perennial fruits, apples are ordinarily propagated asexually by grafting. This is because seedling apples are an example of “extreme heterozygotes”, in that rather than inheriting DNA from their parents to create a new apple with those characteristics, they are instead significantly different from their parents.

Most new apple cultivars originate as seedlings, which either arise by chance or are bred by deliberately crossing cultivars with promising characteristics.

The words ‘seedling’, ‘pippin’, and ‘kernel’ in the name of an apple cultivar suggest that it originated as a seedling.

Apples can also form bud sports (mutations on a single branch). Some bud sports turn out to be improved strains of the parent cultivar. Some differ sufficiently from the parent tree to be considered new cultivars.