Posted on September 6, 2013 by lilianausvat

We need to protect the forests of this Earth and start a global forestation program.

Native American  have been expressing their gratitude for nature — specifically trees — for centuries. The Cherokee call trees the Standing People. A Tree symbolizes permanence, longevity and its firm base symbolise the concept of ‘roots’ and an ongoing relationship with natural surroundings. Such positive characteristics and attributes of trees lend themselves to being revered.

Tree Symbols – The Cedar Tree The ancient Mississippian Mound Builders believed that the universe consisted of three parts with good and bad spiritual forces. These three worlds were linked together and their connection was usually portrayed as a cedar tree.

The Cherokee call trees the Standing People. A Tree symbolizes permanence, longevity and its firm base symbolises the concept of ‘roots’ and an ongoing relationship with natural surroundings. Such positive characteristics and attributes of trees lend themselves to being revered.

The western redcedar is a tall and sturdy tree — reaching 150-200 feet in height, with a cone-shaped crown. Its dense branches are arching and pendulous, and they fan out to provide protection from the elements.

Moreover, it’s beautiful. It comes as no surprise, then, that the western redcedar became a “cornerstone of Northwest Coastal Indian culture”— so much so that these Native Americans call themselves “People of the Cedar.”

For northwestern tribes, cedar was and remains strongly associated with prayer, healing and protection against disease. In House Blessing Ceremonies, its boughs were brushed through the air and believed to cleanse the home’s interior. Various parts of the tree were burned as incense for the purpose of purification, driving out negative energy and drawing in good influences. Pieces of the tree were also carried in medicine pouches to ward of sickness.

The Northwest Coast Indians regarded the tree and its spirit as sacred, believing deeply in its powers, and expressed their gratitude accordingly. They gathered in groves of these ancient trees for ceremonies, retreat and quiet contemplation and honored downed trees with elaborate offerings and prayers.

While tribes such as the Northwest Coast Indians are known to revere whole species of trees, the Lenape Indians, also known as the Delaware Indians, proclaim a special connection to a single tree, aptly named the Sacred Oak. This particular tree lives in the Oley Valley of Pennsylvania and is a former national champion Chinkapin oak.

Last measured in 1977, it stands at 84 feet tall, with a circumference of nearly 20 feet and crown spread of 120 feet. It is estimated to be about 500 years old and grows just off the road in a forested grove.

The legend that accompanies the Sacred Oak begins with a powerful Lenape chief whose wife became gravely ill. The tribes’ wisest healers and medicine men administered herbal medicines, but to no avail. The woman’s condition worsened. In desperation, the distressed chief traveled to the Sacred Oak. 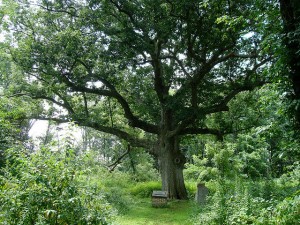 There, he prayed to the Great Spirit that his wife be saved and, upon his return to camp, found that she was in good health.

Years later, this same chief feared attack by a hostile tribe. Once again, he traveled to the oak and offered up prayer. Heeding the guidance of the Great Spirit, the chief gathered blankets and beads of the finest quality and journeyed to the camp of the enemy. His offerings were accepted, and war was averted.

It was from this point on that this Chinkapin oak was looked upon as the shrine tree of the Lenape Indians. It is believed to cure illnesses and relieve troubles, and according to the legend, something dreadful will befall any person who mars the tree. The Sacred Oak is still frequently visited today and likely continues to inspire awe in its beholders.

In keeping with the traditions , this Thanksgiving season, we can recognize and thank trees for their positive contributions to climate, biodiversity, air and water quality, medicine and health, social environments and recreation. As we know, trees today are no less sacred than they were centuries ago.