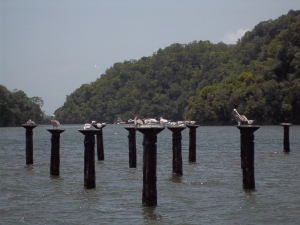 The countries with more forests are more peaceful that one with large deforested areas.Is there a correlation between the percentage that a country is forested and the human society?

One of the records from England shows that deforestation during king Charles I in 1629 created considerable social unrest and riots.

In present times a sample of two neighboring countries that treat nature and forests differently are Dominican Republic and Haiti. They both reside on the same island and is half of the island is forested and half without forest. Dominican Republic is a major tourist destination so the economy and life of people is benefiting from tourism while Haiti is a country very much avoided by tourists. Is the respect for nature a factor?

What if we consider Canada and Middle East? Is the amount of forest and the influence of the forest on human consciousness a factor in the attitude of the people? 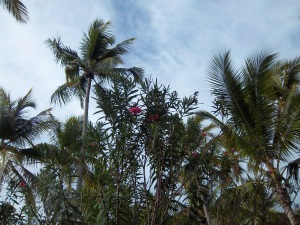 The destruction of the forest has an impact on the society in general and the degradation oflife in general.

Forest environments are advantageous with respect to human emotions, especially among those experiencing chronic stress. Accordingly, shinrin-yoku may be employed as a stress reduction method, and forest environments can be viewed as therapeutic landscapes.

Therefore, customary shinrin-yoku may help to decrease the risk of psychosocial stress-related diseases, and evaluation of the long-term effects of shinrin-yoku is warante.

In Japan, a forest bathing trip, called “Shinrinyoku” in Japanese, is a short, leisurely visit to a forest; it is regarded as being similar to natural aromatherapy.

The subjects experienced a 3-day/2-night trip to forest areas, and blood and urine were sampled on days 2 (the first sampling during each trip) and 3 (the second sampling during each trip), and on days 7 and 30 after the trips. Natural killer (NK) activity, the numbers of NK, granulysin-, perforin-, and granzymes A/B-expressing lymphocytes in the blood, and the concentration of urinary adrenaline were measured.

The same measurements were made before the trips on a normal working day as a control.

The increased NK activity lasted for more than 30 days after the trip, suggesting that a forest bathing trip once a month would enable individuals to maintain a higher level of NK activity.

In contrast, a visit to the city as a tourist did not increase NK activity, the numbers of NK cells, or the level of intracellular granulysin, perforin, and granzymes A/B.

These findings indicate that forest bathing trips resulted in an increase in NK activity, which was mediated by increases in the number of NK cells and the levels of intracellular granulysin, perforin, and granzymes A/B.

Incidences of poor health have increased in urbanized societies, partly due to expanding urbanization and modern lifestyles that are related to increasing sedentary work and mental stress. Growing stress is connected with urban living and contemporary work practices dominated by high technology and virtual worlds . It seems that current health care practices alone cannot solve these problems. Recently, the potential of natural and green spaces in enhancing human health has been recognized

Numerous studies in the U.S. and around the world are exploring the health benefits of spending time outside in nature, green spaces, and, specifically, forests. Recognizing those benefits, in 1982, the Japanese Ministry of Agriculture, Forestry and Fisheries  coined a term for it: shinrin-yoku. It means taking in the forest atmosphere or “forest bathing,” and the ministry encourages people to visit forests to relieve stress and improve health.

Is it time to plant more trees?

What about changing the laws that would allow people that do not own land to plant trees on a government owned lands and take care of them during their life time by gaining ownership of the land that they help to be transformed from a bare land to a forested area while giving them the tools and grands to plant trees.